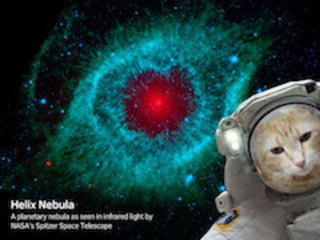 Imagine a place where the weather forecast is always the same: scorching temperatures, relentlessly sunny, and with absolutely zero chance of rain. This hellish scenario exists on the permanent daysides of a type of planet found outside our solar system dubbed an "ultrahot Jupiter." These worlds orbit extremely close to their stars, with one side of the planet permanently facing the star.

What has puzzled scientists is why water vapor appears to be missing from the toasty worlds' atmospheres, when it is abundant in similar but slightly cooler planets. Observations of ultrahot Jupiters by NASA's Spitzer and Hubble space telescopes, combined with computer simulations, have served as a springboard for a new theoretical study that may have solved this mystery.

According to the new study, ultrahot Jupiters do in fact possess the ingredients for water (hydrogen and oxygen atoms). But due to strong irradiation on the planet's daysides, temperatures there get so intense that water molecules are completely torn apart.

"The daysides of these worlds are furnaces that look more like a stellar atmosphere than a planetary atmosphere," said Vivien Parmentier, an astrophysicist at Aix Marseille University in France and lead author of the new study. "In this way, ultrahot Jupiters stretch out what we think planets should look like."

While telescopes like Spitzer and Hubble can gather some information about the daysides of ultrahot Jupiters, the nightsides are difficult for current instruments to probe. The new paper proposes a model for what might be happening on both the illuminated and dark sides of these planets, based largely on observations and analysis of the ultrahot Jupiter known as WASP-121b, and from three recently published studies, coauthored by Parmentier, that focus on the ultrahot Jupiters WASP-103b, WASP-18b and HAT-P-7b, respectively. The new study suggests that fierce winds may blow the sundered water molecules into the planets' nightside hemispheres. On the cooler, dark side of the planet, the atoms can recombine into molecules and condense into clouds, all before drifting back into the dayside to be splintered again.

Water is not the only molecule that may undergo a cycle of chemical reincarnation on these planets, according to the new study. Previous detections of clouds by Hubble at the boundary between day and night, where temperatures mercifully fall, have shown that titanium oxide (popular as a sunscreen) and aluminum oxide (the basis for ruby, the gemstone) could also be molecularly reborn on the ultrahot Jupiters' nightsides. These materials might even form clouds and rain down as liquid metals and fluidic rubies.

Among the growing catalog of planets outside our solar system – known as exoplanets – ultrahot Jupiters have stood out as a distinct class for about a decade. Found in orbits far closer to their host stars than Mercury is to our Sun, the giant planets are tidally locked, meaning the same hemisphere always faces the star, just as the Moon always presents the same side to Earth. As a result, ultrahot Jupiters' daysides broil in a perpetual high noon. Meanwhile, their opposite hemispheres are gripped by endless nights. Dayside temperatures reach between 3,600 and 5,400 degrees Fahrenheit (2,000 and 3,000 degrees Celsius), ranking ultrahot Jupiters among the hottest exoplanets on record. Nightside temperatures are around 1,800 degrees Fahrenheit cooler (1,000 degrees Celsius), cold enough for water to re-form and, along with other molecules, coalesce into clouds.

Hot Jupiters, cousins to ultrahot Jupiters with dayside temperatures below 3,600 degrees Fahrenheit (2,000 Celsius), were the first widely discovered type of exoplanet, starting back in the mid-1990s. Water has turned out to be common in their atmospheres. One hypothesis for why it appeared absent in ultrahot Jupiters has been that these planets must have formed with very high levels of carbon instead of oxygen. Yet the authors of the new study say this idea could not explain the traces of water also sometimes detected at the dayside-nightside boundary.

To break the logjam, Parmentier and colleagues took a cue from well-established physical models of the atmospheres of stars, as well as "failed stars," known as brown dwarfs, whose properties overlap somewhat with hot and ultrahot Jupiters. Parmentier adapted a brown dwarf model developed by Mark Marley, one of the paper's coauthors and a research scientist at NASA's Ames Research Center in Silicon Valley, California, to the case of ultrahot Jupiters. Treating the atmospheres of ultrahot Jupiters more like blazing stars than conventionally colder planets offered a way to make sense of the Spitzer and Hubble observations.

"With these studies, we are bringing some of the century-old knowledge gained from studying the astrophysics of stars, to the new field of investigating exoplanetary atmospheres," said Parmentier.

Spitzer's observations in infrared light zeroed in on carbon monoxide in the ultrahot Jupiters' atmospheres. The atoms in carbon monoxide form an extremely strong bond that can uniquely withstand the thermal and radiational assault on the daysides of these planets. The brightness of the hardy carbon monoxide revealed that the planets' atmospheres burn hotter higher up than deeper down. Parmentier said verifying this temperature difference was key for vetting Hubble's no-water result, because a uniform atmosphere can also mask the signatures of water molecules.

"These results are just the most recent example of Spitzer being used for exoplanet science – something that was not part of its original science manifest," said Michael Werner, project scientist for Spitzer at NASA's Jet Propulsion Laboratory in Pasadena, California. "In addition, it's always heartening to see what we can discover when scientists combine the power of Hubble and Spitzer, two of NASA's Great Observatories."

Although the new model adequately described many ultrahot Jupiters on the books, some outliers do remain, suggesting that additional aspects of these worlds' atmospheres still need to be understood. Those exoplanets not fitting the mold could have exotic chemical compositions or unanticipated heat and circulation patterns. Prior studies have argued that there is a more significant amount of water in the dayside atmosphere of WASP-121b than what is apparent from observations, because most of the signal from the water is obscured. The new paper provides an alternative explanation for the smaller-than-expected water signal, but more studies will be required to better understand the nature of these ultrahot atmospheres.

Resolving this dilemma could be a task for NASA's next-generation James Webb Space Telescope, slated for a 2021 launch. Parmentier and colleagues expect it will be powerful enough to glean new details about the daysides, as well as confirm that the missing dayside water and other molecules of interest have gone to the planets' nightsides.

"We now know that ultrahot Jupiters exhibit chemical behavior that is different and more complex than their cooler cousins, the hot Jupiters," said Parmentier. "The studies of exoplanet atmospheres is still really in its infancy and we have so much to learn."

The new study is forthcoming in the journal Astronomy and Astrophysics.