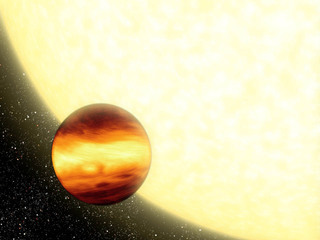 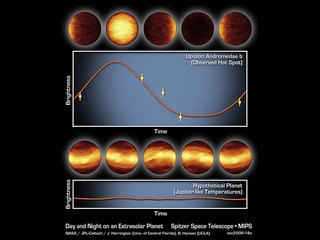 The Light and Dark Sides of a Distant Planet

This is an artist's concept of a hypothetical 10-million-year-old star system. The bright blur at the center is a star much like our Sun. The other orb in the image is a gas-giant planet like Jupiter. Wisps of white throughout the image represent traces of gas.

Astronomers using NASA's Spitzer Space Telescope have found evidence showing that gas-giant planets either form within the first 10 million years of a sun-like star's life, or not at all. The lifespan for sun-like stars is about 10 billion years.

The scientists came to this conclusion after searching for traces of gas around 15 different sun-like stars, most with ages ranging from 3 million to 30 million years. With the help of Spitzer's Infrared Spectrometer instrument, they were able to search for relatively warm gas in the inner regions of these star systems, an area comparable to the zone between Earth and Jupiter in our own solar system. They also used ground-based radio telescopes to search for cooler gas in the outer regions of these systems, an area comparable to the zone around Saturn and beyond.

Reborn Kepler Can Still Find Planets
Over its ten years in space, NASA's Spitzer Space Telescope has evolved into a premier tool for studying exoplanets.

Kepler Spacecraft
This artist's concept illustrates the fate of two different planets: the one on the left is similar to Earth, made up largely of silicate-based rocks with oceans coating its surface.

A Tale of Two Worlds: Silicate Versus Carbon Planets (Artist Concept)
Weighing in at 11 times Jupiter’s mass and orbiting its star at 650 times the average Earth-Sun distance, planet HD 106906 b is unlike anything in our own Solar System and throws a wrench in planet...

HD 106906 b Planet Animation
This figure charts 30 hours of observations taken by NASA's Spitzer Space Telescope of a strongly irradiated exoplanet (an planet orbiting a star beyond our own). It shows the very rapid heating th...

Exoplanet HD 80606b Infrared Light Curve
Cluster of Stars in Kepler's Sight - This image zooms into a small portion of Kepler's full field of view -- an expansive, 100-square-degree patch of sky in our Milky Way galaxy.

Star Cluster NGC 6791 from Kepler First Light Image
What does an extremely young planetary system look like? The answer depends on your point of view. This diagram shows how such a system appears when viewed from different directions.

Observing Young Stars: Hitting the 'Sweet Spot'
An unusual, methane-free world is partially eclipsed by its star in this artist's concept.

Scenarios for the Evolution of Asteroid Belts
Tell someone they're unique, with our Earth valentine.

Earth Valentine
The diversity of exoplanets is large — more than 800 planets outside the Solar System have been found to date, with thousands more waiting to be confirmed.

An Exoplanet Seen From Its Moon
This closeup of an image captured by the SOFI instrument on ESOs New Technology Telescope at the La Silla Observatory shows the free-floating planet CFBDSIR J214947.2-040308.9 in infrared light.

The free-floating planet CFBDSIR J214947.2-040308.9
This plot of data from NASA's Spitzer Space Telescope tells astronomers that a toasty gas exoplanet, or a planet beyond our solar system, contains water vapor.

Exoplanet Forecast: Hot and Wet
The artist's concept depicts Kepler-62e, a super-Earth-size planet in the habitable zone of a star smaller and cooler than the sun, located about 1,200 light-years from Earth in the constellation L...

Kepler-62e (Artist Concept)
The analysis of the first three years of Kepler data have revealed more than 3,600 candidate worlds. The diagram plots the planet candidates by oribtal period on the x-axis and size relative to Ear...

Solar System in the Making
This illustration shows the unusual orbit of planet Kepler-413b around a close pair of orange and red dwarf stars. The planet's 66-day orbit is tilted 2.5 degrees with respect to the plane of the b...

Wobbly Planet Orbital Schematic (Illustration)
This artist's conception shows a young, hypothetical planet around a cool star. A soupy mix of potentially life-forming chemicals can be seen pooling around the base of the jagged rocks.

Chemical Soups Around Cool Stars
Researchers have detected the first "exomoon" candidate -- a moon orbiting a planet that lies outside our solar system. Using a technique called "microlensing," they observed what could be either a...

Moon or Planet? The 'Exomoon Hunt' Continues (Artist's Concept)
This image, taken with the Advanced Camera for Surveys aboard NASA's Hubble Space Telescope, shows the planet Fomalhaut b, orbiting its parent star, Fomalhaut.

HST ACS/HRC Wide View of Fomalhaut System
Kepler-11 is a sun-like star around which six planets orbit. At times, two or more planets pass in front of the star at once, as shown in this artist's conception of a simultaneous transit of three...

Extraordinary New Planetary System
This plot compares the colors of solar system planets to the color of the hot-Jupiter-class planet HD 189733b.