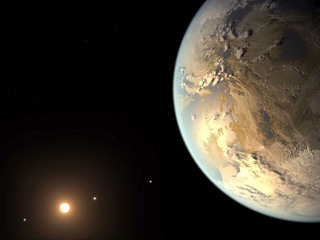 WISE J085510.83-071442.5 is as cold as the North Pole (or between minus 54 and 9 degrees Fahrenheit, which is minus 48 to minus 13 degrees Celsius). The color of the brown dwarf in this image is arbitrary; it would have different colors when viewed in different wavelength ranges.

PIA18001
14.5 MB
image/tiff
Download
This diagram compares our own solar system to Kepler-47, a double-star system containing two planets, one orbiting in the so-called "habitable zone." This is the sweet spot in a planetary system wh...

Orbiting in the Habitable Zone of Two Suns
This artist's conception depicts the Kepler-10 star system, located about 560 light-years away.

Kepler-10 Stellar Family Portrait
An artist's conception of Kepler-78b orbiting its parent star once every 8.5 hours.

Kepler-78b
Hubble finds a deep-blue exoplanet that may feature pummeling showers of glass rain moving at 4,500 mph. Care to visit?

Blue and bizarre
Highlighted are 12 new planet candidates from the seventh Kepler planet candidate catalog that are less than twice the size of Earth and orbit in the stars' habitable zone—the range of distances fr...

Brown Dwarf Aurora
This artist's conception shows the silhouette of a rocky planet, dubbed HD 219134b, as it passes in front of its star.

Little Black Spot on the Star Today (Artist's Concept)
Inverted image (dark stars on light sky) Stars in the image are all brighter than magnitude 18.5. Stars brighter than 11.5 are "saturated" (all look the same brightness in the image).

Kepler Full Focal Plane Image - Inverted
This artist's concept depicts an itsy bitsy planetary system -- so compact, in fact, that it's more like Jupiter and its moons than a star and its planets.

Kepler's Second Light: How K2 Will Work
This infrared data from NASA's Spitzer Space Telescope tells astronomers that a distant gas planet, a so-called "hot Jupiter" called HD 209458b, might be smothered with high clouds. It is one of th...

Cracking the Code of Faraway Worlds: an Exoplanet Atmosphere
This artist's concept shows what the weather might look like on cool star-like bodies known as brown dwarfs. These giant balls of gas start life like stars, but lack the mass to sustain nuclear fus...

Storms on Brown Dwarfs
This artist's animation shows a celestial body about the size of our moon slamming at great speed into a body the size of Mercury.

Planetary Demolition Derby
Close-up of the planet Fomalhaut b as imaged by the Hubble Space Telescope. Fomalhaut b was discovered in Hubble data in 2008.

HST ACS/HRC Wide View of Fomalhaut b Planet in 2004 and 2006
Planets having atmospheres rich in helium may be common in our galaxy, according to a new theory based on data from NASA's Spitzer Space Telescope. These planets would be around the mass of Neptune...

Image of gas giant GJ 504b (annotated)
For the first time since exoplanets, or planets around stars other than the sun, were discovered almost 20 years ago, X-ray observations have detected an exoplanet passing in front of its parent st...

Exo-eclipse in x-ray vision
NASA's Kepler mission has discovered a world where two suns set over the horizon instead of just one.

Where the Sun Sets Twice (Artist Concept)
Researchers have detected the first "exomoon" candidate -- a moon orbiting a planet that lies outside our solar system. Using a technique called "microlensing," they observed what could be either a...

Moon or Planet? The 'Exomoon Hunt' Continues (Artist's Concept)
This artist's concept depicts a planetary system discovered by Aleksander Wolszczan in 1992 around a pulsar.

Extreme Planets
First light image from two of the CCD modules of the Kepler mission.

Depth Perception in Space
Cluster of Stars in Kepler's Sight - This image zooms into a small portion of Kepler's full field of view -- an expansive, 100-square-degree patch of sky in our Milky Way galaxy.

Star Cluster NGC 6791 from Kepler First Light Image
This size and scale of the Kepler-452 system compared alongside the Kepler-186 system and the solar system.

Kepler-452 and the Solar System