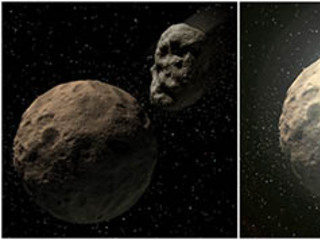 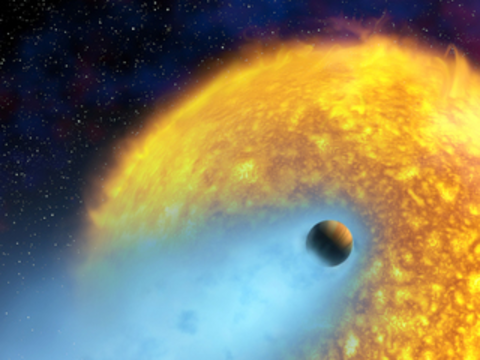 In this artist's conception, a possible newfound planet spins through a clearing in a nearby star's dusty, planet-forming disc. This clearing was detected around the star CoKu Tau 4 by NASA's Spitzer Space Telescope. Astronomers believe that an orbiting massive body, like a planet, may have swept away the star's disc material, leaving a central hole.The possible planet is theorized to be at least as massive as Jupiter, and may have a similar appearance to what the giant planets in our own solar system looked like billions of years ago. A graceful ring, much like Saturn's, spins high above the planet's cloudy atmosphere. The ring is formed from countless small orbiting particles of dust and ice, leftovers from the initial gravitational collapse that formed the possible giant planet.If we were to visit a planet like this, we would have a very different view of the universe. The sky, instead of being the familiar dark expanse lit by distant stars, would be dominated by the thick disc of dust that fills this young planetary system. The view looking toward CoKu Tau 4 would be relatively clear, as the dust in the interior of the disc has fallen into the accreting star. A bright band would seem to surround the central star, caused by light scattered back by the dust in the disc. Looking away from CoKu Tau 4, the dusty disc would appear dark, blotting out light from all the stars in the sky except those which lie well above the plane of the disc.

Out of the Dust, A Planet is Born
1.81 MB
image/tiff
Download
When we talk about the enormity of the cosmos, it’s easy to toss out big numbers – but far more difficult to wrap our minds around just how large, how far and how numerous celestial bodies really a...

Our Milky Way Galaxy: How Big is Space?
The artist's concept depicts Kepler-62e, a super-Earth-size planet in the habitable zone of a star smaller and cooler than the sun, located about 1,200 light-years from Earth in the constellation L...

Kepler-62e (Artist Concept)
Astronomers using the Atacama Large Millimeter/submillimeter Array (ALMA) have taken the first ever image of the snow line in an infant planetary system.

ALMA image of the carbon monoxide snow line around TW Hydrae
This artist's concept shows what a fiery hot star and its close-knit planetary companion might look close up if viewed in visible (left) and infrared light.

Blinded by the Light
This artist's concept shows a brown dwarf surrounded by a swirling disk of planet-building dust.

Solar System in the Making
The artist's concept depicts a comet-like tail of a possible disintegrating super Mercury-size planet candidate as it transits its parent star named KIC 12557548.

Disintegrating Super Mercury-size Planet
A newly discovered exoplanet, Kepler-452b, takes us closer than ever to finding a planet that looks like our own. This super-Earth is 60% larger than our home world, but its year is only 20 days lo...

What if there is some place like home?
This plot shows the masses and sizes of the smallest exoplanets for which both quantities have been measured. The solar system planets (shown in red) are for comparison.

Mars-size Kepler-138b Gets a Mass
A hypothetical planet is depicted here moving through the habitable zone and then further out into a long, cold winter.

Eccentric Habitable Zones
One of the first exoplanets ever discovered, Gamma Cepehi A b is a comeback story.

First Discoveries: Gamma Cephei A b
Researchers have detected the first "exomoon" candidate -- a moon orbiting a planet that lies outside our solar system. Using a technique called "microlensing," they observed what could be either a...

Moon or Planet? The 'Exomoon Hunt' Continues (Artist's Concept)
This infrared data from NASA's Spitzer Space Telescope called a spectrum tells astronomers that a distant gas planet, a so-called "hot Jupiter" called HD 209458b, might be smothered with high cloud...

Cracking the Code of Faraway Worlds: an Exoplanet Atmosphere
This artist's concept depicts one possible appearance of the planet Kepler-452b, the first near-Earth-size world to be found in the habitable zone of star that is similar to our sun.

Soaking up the Rays of a Sun-like Star - Artistic Concept
Over its ten years in space, NASA's Spitzer Space Telescope has evolved into a premier tool for studying exoplanets.

Gliese 581
Watch what happens in the life of a star and its planets. This version of the video has no text overlays.

Life and Death of a Planetary System: No Text
This artist's conception shows a young, hypothetical planet around a cool star. A soupy mix of potentially life-forming chemicals can be seen pooling around the base of the jagged rocks.

Chemical Soups Around Cool Stars
55 Cancri e is a super Earth exoplanet that orbits a G-type star. Its mass is 8.08 Earths, it takes 0.7 days to complete one orbit of its star, and is 0.01544 AU from its star. Its discovery was an...

55 Cancri e 3D Model
Twelve Exoplanet discoveries from Kepler that are less than twice the size of Earth and reside in the habitable zone of their host star. The sizes of the exoplanets are represented by the size of e...

The life cycle of a Sun-like star (annotated)
Kepler-186f is the first Earth-size planet discovered in the potentially 'habitable zone' around another star, where liquid water could exist on the planet's surface. Its star is much cooler and re...

Where the Grass is Always Redder
Artist's representation of the "habitable zone," the range of orbits where liquid water is permitted on the surface of a planet.

Odds are on Oodles of Earths
This artist's concept shows a hypothetical "rejuvenated" planet -- a gas giant that has reclaimed its youthful infrared glow.

Hypothetical 'Rejuvenated' Planets (Artist's Concept)
For the first time since exoplanets, or planets around stars other than the sun, were discovered almost 20 years ago, X-ray observations have detected an exoplanet passing in front of its parent st...