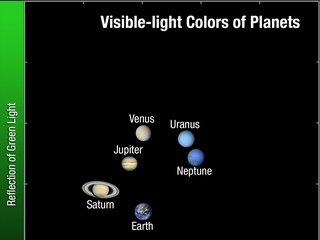 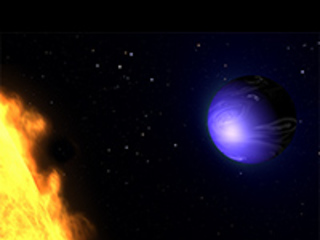 ABOUT THIS IMAGE:
This illustration shows a hot-Jupiter-class planet orbiting its yellow-orange star, HD 189733. NASA's Hubble Space Telescope measured the actual visible-light color of the planet, which is deep blue. This color is not due to the presence of oceans, but is caused by the effects of a 2,000-degree-Fahrenheit atmosphere where silicate particles melt to make "raindrops" of glass that scatter blue light more than red light.

The planet HD 189733b was discovered in 2005 and is only 2.9 million miles from its parent star. The planet is so close to its star that it is gravitationally "tidally locked" so that one side always faces the star and the other side is always dark. In 2007 NASA's Spitzer Space Telescope made a thermal map that identified the presence of an early afternoon hotspot on the planet, as shown here. High-altitude clouds, laced with silicates, may blow from the day side to the night side at 4,500 miles per hour.

Because the planet is only 63 light-years from Earth, a visitor would see many of the same stars we see in our nighttime sky, though the constellation patterns would be different. Our Sun and the nearest star to our Sun, Alpha Centauri, appear as two faint stars near image center.

STScI-2013-26 annotated
20.6 MB
image/tiff
Download
NASA's Kepler mission has discovered a world where two suns set over the horizon instead of just one.

Where the Sun Sets Twice (Artist Concept)
Like Luke Skywalker's planet "Tatooine" in Star Wars, Kepler-16b orbits a pair of stars. Depicted here as a terrestrial planet, Kepler-16b might also be a gas giant like Saturn. Prospects for life ...

Where your shadow always has company
There is only one planet we know of so far that is teeming with life–– Earth. If we want to find life on other planets, we start with the ingredients we know at home.

Hot, Carbon-Rich Planet
Artist's impression of a transiting Jupiter-mass exoplanet around a star slightly more massive than the Sun, such as the one discovered around SWEEPS-04.

Increasing the Odds of the Sweep
This wide-field view of the sky around the bright star Alpha Centauri was created from photographic images forming part of the Digitized Sky Survey 2.

The bright star Alpha Centauri and its surroundings
This artist's concept shows planet KELT-9b orbiting its host star, KELT-9. It is the hottest gas giant planet discovered so far.

Video of KELT-9b
This artist's concept depicts giant planets circling between belts of dust. Scientists think the star system HD 95086 may have a planetary architecture similar to this.

Hidden in a Dust Halo
This diagram compares our own solar system to Kepler-47, a double-star system containing two planets, one orbiting in the so-called "habitable zone." This is the sweet spot in a planetary system wh...

Orbiting in the Habitable Zone of Two Suns
This map, the first-ever of the surface of an exoplanet, shows temperature variations across the cloudy tops of a gas giant called HD 189733b.

First Map of an Exoplanet Atmosphere
This artist's concept illustrates how planetary systems arise out of massive collisions between rocky bodies.

The Rocky World of Young Planetary Systems (Annotated)
Keep your Valentine close with a tidally-locked planet, that always faces its star.

Tidally-locked Valentine
Tell someone they're unique, with our Earth valentine.

55 Cancri e: Skies Sparkle Above a Never-Ending Ocean of Lava
This artist's concept depicts in the foreground planet Kepler-62f, a super-Earth-size planet in the habitable zone of its star, which is seen peeking out from behind the right edge of the planet.

The life cycle of a Sun-like star (annotated)
What does an extremely young planetary system look like? The answer depends on your point of view. This diagram shows how such a system appears when viewed from different directions.

In the Zone: How Scientists Search for Habitable Planets
This plot of data from NASA's Spitzer Space Telescope indicates the presence of molecules in the planet WASP-12b -- a super-hot gas giant that orbits tightly around its star.

Goldilocks
An artist's impression of a red supergiant engulfing a Jupiter-like planet as it expands.

Hungry Red Giant
Researchers have detected the first "exomoon" candidate -- a moon orbiting a planet that lies outside our solar system. Using a technique called "microlensing," they observed what could be either a...

Moon or Planet? The 'Exomoon Hunt' Continues (Artist's Concept)
The first Earth-size planet discovered around a near solar twin, the discovery of Kepler-452b brings us closer than ever to finding an Earth-like planet.

Infographic: Profile of planet Kepler-452b
NASA's Spitzer Space Telescope has found that the hottest part of a distant planet, named upsilon Andromedae b, is not under the glare of its host star as might be expected.

Planetary Hot Spot Not Under the Glare of Star