The star known as Proxima Centauri, the Sun’s nearest interstellar neighbor, turns out to have a hair-trigger temper – frequently erupting with potentially damaging stellar flares, including its largest ever recorded.

And these sizzling outbursts might be bad news for any potential lifeforms on the surface of a closely orbiting, probably rocky planet called Proxima b.

“It’s hard to imagine that life could emerge, being subjected to radiation that frequently,” said Meredith MacGregor, an astronomer at the University of Colorado and lead author of a newly published paper on Proxima’s surprisingly powerful flares.

“You’re not only eroding the atmosphere; it’s not great for any [possible] lifeforms hanging around on the planet,” MacGregor said.

Over a 40-hour period in 2019, MacGregor led a group of scientists to observe one extremely high-energy flare – and a great many large, medium and small ones – on Proxima, a type of star known as a red dwarf. The biggest flare briefly made the star 14,000 times brighter than normal, as measured in ultraviolet light.

Previous research has found such flares before. But in this study, for the first time, these flare measurements were captured in a variety of wavelengths, or different slices of the light spectrum. The study team included Thomas Barclay of the University of Maryland, Baltimore County, now working at NASA’s Goddard Space Flight Center in Greenbelt, Maryland, and the work was funded in part by NASA.

The results were contrary to many scientists’ expectations. And they raise questions about the potential habitability of rocky, Earth-sized planets that orbit other red dwarf stars, known to scientists as “M-dwarfs.”

M-dwarfs are smaller and fainter than our Sun. They also happen to far outnumber other types of stars in our galaxy – including larger, yellow stars like ours. One famous example of Earth-size planets around an M-dwarf is the TRAPPIST-1 system, which consists of seven rocky worlds. Telescope observations have uncovered many other rocky planets around M-dwarfs, too. But the new findings suggest stars like this may present problems for the emergence of life.

“M-dwarfs are in fact much more flarey, more active, than Sun-like stars,” MacGregor said. “We keep finding planets around M-dwarfs, and talking about habitability. At the same time, these stars are doing something crazy.”

To make her measurements, MacGregor orchestrated a global performance worthy of a master conductor. She coordinated simultaneous observations with nine telescopes, on the ground and in space, gaining flare observations from five. These included NASA’s Hubble Space Telescope, the Transiting Exoplanet Survey Satellite (TESS) and ALMA, a massive grid of radio telescopes in the Chilean desert.

Critically, this telescopic assortment captured measurements from across the electromagnetic spectrum, from long, slow, ponderous radio waves to the short, rapidly pulsing ultra-violet.

That provided a far richer picture of the subtle inner workings of Proxima’s gigantic flare – and its many smaller cousins.

Anatomy of a flare

Stellar flares are believed to be a kind of high-energy whiplash caused by twisting and writhing magnetic fields. These loops and arcs can cross each other up as their “feet” – the points where they connect with the star’s surface – dance around in complex patterns.

When the tension becomes too great, they can snap, releasing huge amounts of energy before reconnecting to the surface.

Our Sun also flares, but its eruptions are puny compared to Proxima’s – even though Proxima is a far smaller star.

“We were observing giant flares every day [on Proxima], and medium and small flares many times per day,” MacGregor said.

The cross-section of wavelengths obtained in the new study also could offer a roadmap to understanding other red dwarf stars. It’s among the few such efforts to capture slices of the spectrum of the “millimeter” variety – those long, ponderous waves – during flaring events.

The millimeter spikes were tightly linked to those of the shorter ultraviolet (or UV) waves. That discovery, also unexpected, could mean that millimeter discharges might be used as a proxy to hunt for corresponding UV radiation. And that, in turn, could allow astronomers to pore over old data, as well as new, to look for signs of flaring that were previously unseen.

The new millimeter and UV measurements also appear to originate at the top of those reconnecting, energy-releasing magnetic loops. This was previously unknown, and shows that the multi-wavelength readings allow scientists to puzzle out the physical structure of the flares themselves.

MacGregor is planning an encore, arranging another command performance of telescopes to examine more red dwarfs. Her goal: an intimate understanding of the true temperament of these volatile stars, and whether that might strongly influence the chances for life on the planets locked in their orbit.

“This really motivates going out and looking at more stars,” she said. “If we’re talking about the habitability of M-dwarfs, clearly we need to understand this. You have to understand stars and planets together: Neither acts in isolation from the other.” 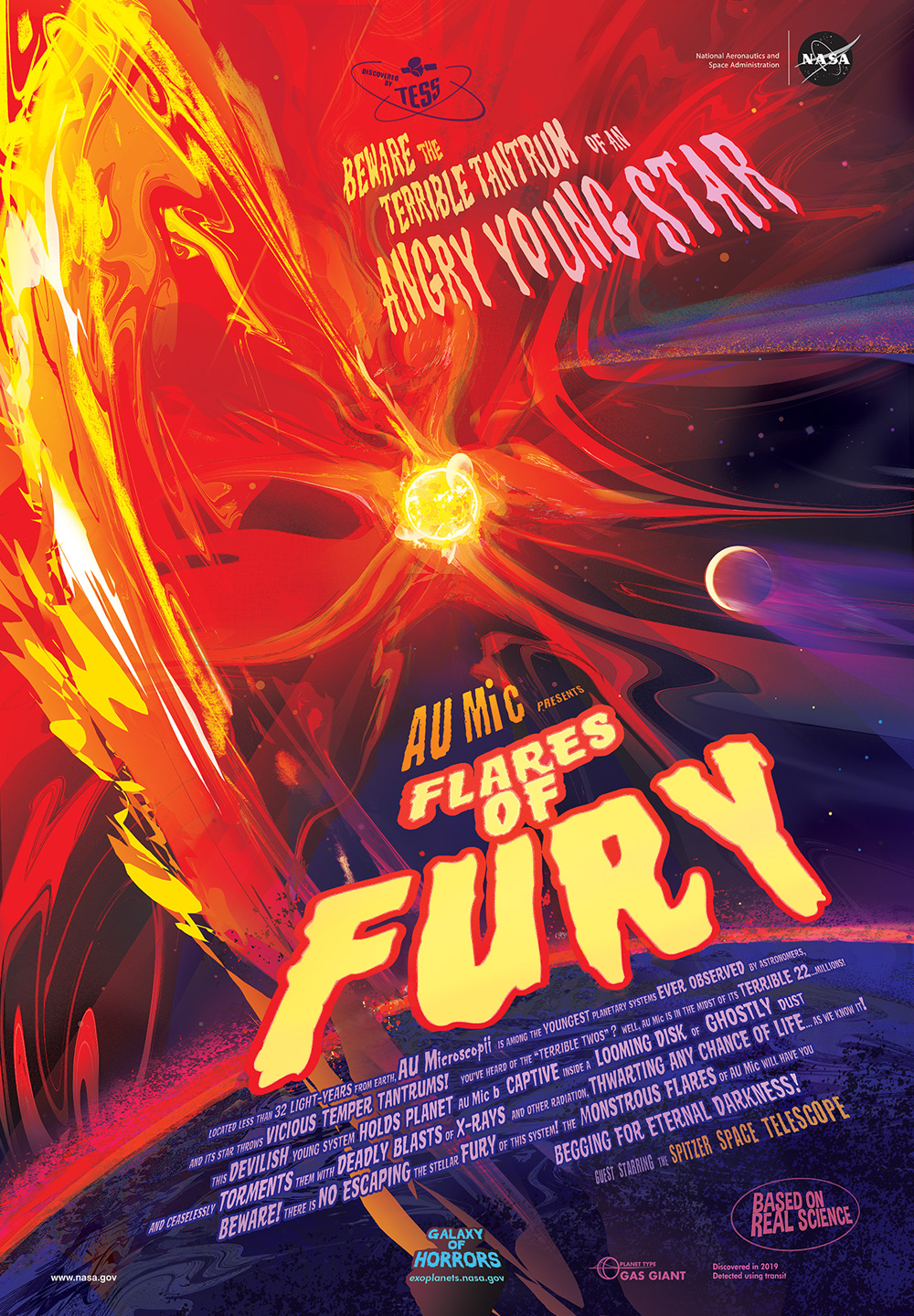 Beware the terrible tantrum of an angry young star! Located less than 32 light-years from Earth, AU Microscopii is among the youngest planetary systems ever observed by astronomers, and its star throws vicious temper tantrums! You’ve heard of the “terrible twos”? Well, AU Mic is in the midst of its terrible 22 … millions! This devilish young system holds planet AU Mic b captive inside a looming disk of ghostly dust and ceaselessly torments it with deadly blasts of X-rays and other radiation, thwarting any chance of life… as we know it!