We can’t hear it with our ears, but the stars in the sky are performing a concert, one that never stops. The biggest stars make the lowest, deepest sounds, like tubas and double basses. Small stars have high-pitched voices, like celestial flutes. These virtuosos don’t just play one "note" at a time, either — our own Sun has thousands of different sound waves bouncing around inside it at any given moment.

Understanding these stellar harmonies represents a revolution in astronomy. By "listening" for stellar sound waves with telescopes, scientists can figure out what stars are made of, how old they are, how big they are and how they contribute to the evolution of our Milky Way galaxy as a whole. The technique is called asteroseismology. Just as earthquakes (or Earth’s seismic waves) tell us about the inside of Earth, stellar waves — resulting in vibrations or "star quakes" — reveal the secret inner workings of stars.

NASA’s Kepler space telescope, now retired, was a key player in that revolution, delivering observations of waves in tens of thousands of stars after its 2009 launch. NASA’s Transiting Exoplanet Survey Satellite (TESS), which launched in April 2018, may observe sound waves in up to one million red giants — the massive, evolved stars that represent what our Sun will look like in about 5 billion years. While both Kepler and TESS are most famous for hunting for planets beyond our solar system (exoplanets), they are also powerful, sensitive tools for detecting stellar vibrations. And, the more we know about stars, the more we know about planets that orbit them.

"We are using seismology to provide an exquisite characterization of the host stars — and hence the planets — we’ve discovered," said W]illiam Chaplin, professor of astrophysics at the University of Birmingham, United Kingdom, who leads the Kepler’s asteroseismology effort for Sun-like stars.​

What are these waves?

Like bubbles rising in a pot of boiling water, sound waves move through a star’s interior because of temperature changes. They begin in the star’s convection zone, which is the upper 30 percent of a star’s volume if it is similar to the Sun. Hot gas moves upward to the star’s surface, where it cools off and falls back down — though far more violently and turbulently than in your kitchen. Convection, this movement of heat rising and falling, creates waves that bounce around in the star in different ways.

A similar process happens on Earth: seismic waves, caused by convection, make plates on the planet’s surface move and bump up against one another, eventually leading to earthquakes. The Moon also has quakes, measured by instruments that NASA’s Apollo astronauts delivered. And NASA’s InSight is delving into the interior of Mars by measuring seismic waves there. But unlike on these planetary bodies, stellar sound waves are generated continuously by turbulence in the near-surface layers of stars.

Convection-driven waves cause the whole star to expand and contract, in effect ringing the star like a bell. So many waves propagate at once that the overall stellar surface jostles around like Jell-O, but so subtly that the motion would not be visible to the eye. In close-up images of our own Sun, we see the effects of waves as localized areas of brightening and dimming. These are distinct from the dark spots we know as sunspots on our Sun. Sunspots form in areas where the Sun’s magnetic field lines weaken the amount of energy brought to the surface, and represent temporarily cooler regions on the surface of the star.

Some waves ripple around the entire circumference of the star, while others dart right through the star’s core. The bigger the star, the longer it takes sound waves to travel in its interior. In the Sun, a typical wave completes one cycle in five minutes. Any given wave lasts a few days in Sun-like stars, but because new waves crop up all the time, stars are always vibrating. Red giants, which are dozens of times as big as the Sun, have lower-frequency waves that can propagate for weeks to months. By studying stars of various ages, scientists learn about what will happen to our own Sun as it gets older. 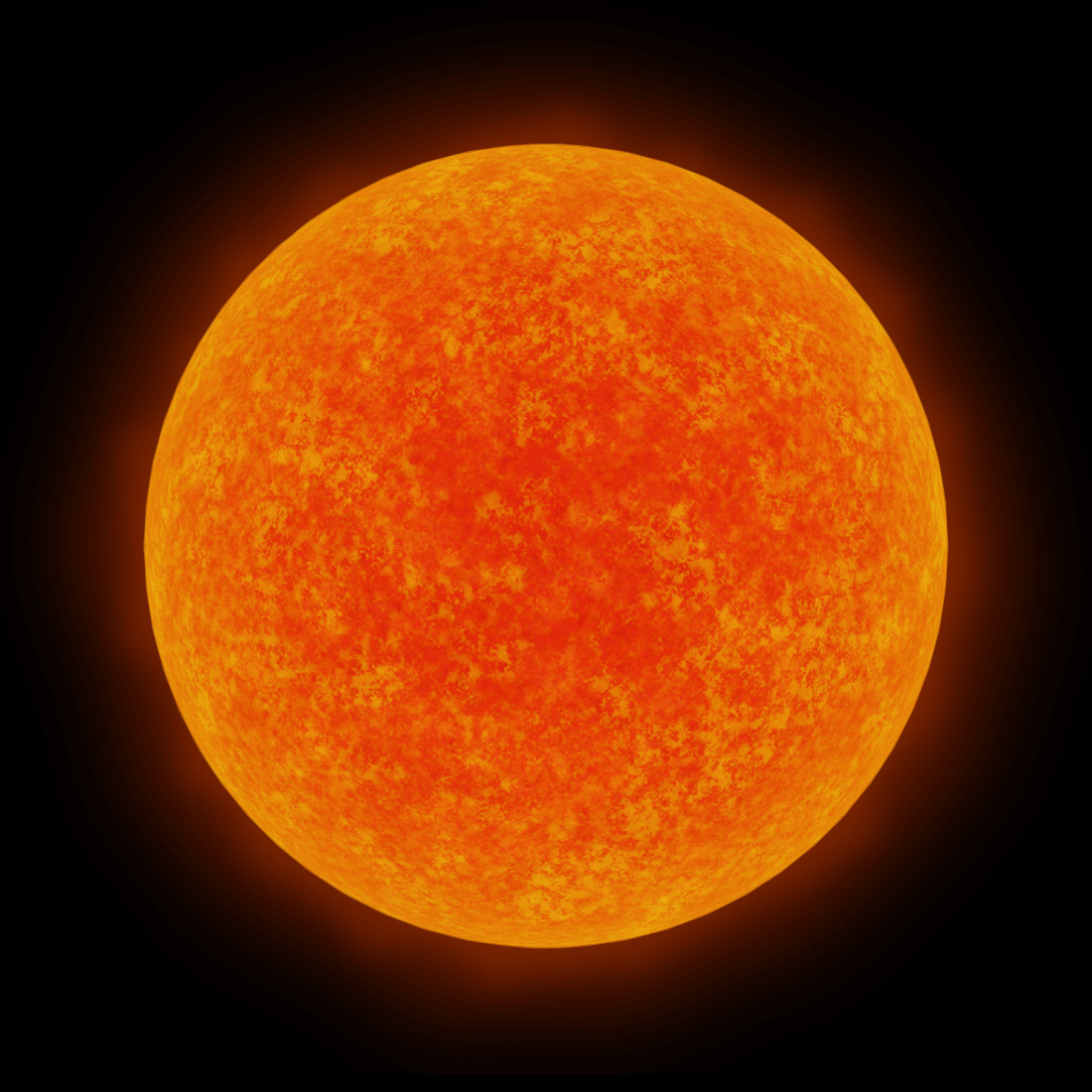 You can’t hear them, but sound waves propagate through stars all the time in thousands of different ways. This artist’s concept shows how a few individual waves travel through a hypothetical star. Some waves propagate only around top layer of a star, while others travel right through the center. The waves cause the star to vibrate and brighten in ways that are too subtle to see with the eye, but which can be detected with telescopes such as NASA’s TESS Space Telescope. Scientists can determine a star’s interior structure, which gives information about size, composition and age, by detecting these vibrations. Credit: NASA/JPL-Caltech

What are we measuring?

Because the Sun is the closest star to us, it’s not surprising that scientists first discovered stellar vibrations there. In 1962, a group of scientists led by Caltech physicist Robert Leighton noted "cells" of moving material at the Sun’s surface, associated with variations in surface brightness, while using the 60-foot solar tower at Mount Wilson Observatory near Los Angeles. Follow-up studies in the 1970s revealed that waves of different frequencies accounted for this behavior. By tracking the Sun’s waves, scientists realized in 1977 that our star’s convection zone ran much deeper than predicted. Since then, the field of helioseismology has gained a much better understanding of the Sun’s rotation and interior structure.

Most other stars are so far away that telescopes can only view them as single points of light, and directly seeing detailed surface features is impossible. The actual changes in a star’s overall brightness caused by sound waves are unimaginably small: about four parts in a million. Those subtle variations are the equivalent of turning your cell phone flashlight on and off in a room full of very bright spotlights, such as the ones that form the famous light beam at the Luxor Hotel and Casino in Las Vegas, said Jennifer van Saders, astronomer at the University of Hawaii. From afar, the building would still appear to emit one unchanging light, because the effect of the flickering flashlight is so subtle.

One way of picking out stellar vibrations uses a principle called the Doppler effect – that light coming toward the observer shifts more blue, and light moving away shifts more red. As the surface of the star moves, an instrument called a spectrograph picks up these shifts. A second method is to measure the overall brightness of light coming from the star over time, which is the method used by both Kepler and TESS.

Subtle changes in brightness are hard to discern with ground-based telescopes because Earth’s atmosphere and weather activity get in the way, and because daylight interrupts observations. For continuous listening to the stellar orchestra, astronomers needed space telescopes. The Convection, Rotation and Planetary Transits (CoRoT) satellite, launched in 2006 and led by the French space agency (CNES), and Kepler, launched in 2009, were the pioneers in exploring helioseismology in an expanse of stars in greater detail than ever before.

"Kepler stares at these points of light and it watches them twinkle — not twinkle as they do here on Earth, because that’s the atmosphere causing them to twinkle — but twinkle because they’re actually changing brightness," van Saders said.

In its first four years, Kepler stared at one patch of sky and measured starlight every minute — the longest continuous observations ever of any stars. (In its later K2 mission, the spacecraft changed its field of view about every three months). This unique dataset, together with nearly six years of data from CoRoT, demonstrated that many stars in the galaxy do not have interiors like the Sun — even those only 20 to 30 percent more massive. The low voices of giant stars confirmed predictions about the interior structures of red giants for the first time.​

"That’s what Kepler gave us — the ability to really test what’s going on in the interiors for stars that aren’t just the Sun," van Saders said.

Asteroseismology is also useful for measuring how the surface of a star rotates compared to its interior. While studying stellar sound waves, scientists also were surprised to learn that in one type of red giant, the core rotates rapidly while the surface rotates slowly. A 2012 study using Kepler data found three giant stars whose interiors spin 10 times faster than their surfaces. There’s much more work to be done in terms of creating models of the inner and outer portions of stars.

Scientists are still exploring how the Sun’s vibrations compare to stars with different masses and ages, and how that "ringing" will change as the Sun ages into a red giant. "This is one of the things we are trying to figure out, and that Kepler and TESS and other missions can help us understand," said Dan Huber, astronomer at the University of Hawaii, Honolulu.

Know thy star, know thy planet

Many important aspects of a planet — including size, age and whether or not it could support life – can only be determined from what scientists know about its host star.

When a planet passes in front of its star, TESS detects this "transit" by measuring a sharp dip in the brightness of the star as the planet blocks some of its light (very different from the ripple-like quake signatures). The amount of dimming of the star’s light during a transit is related to the size of the planet relative to the size of the star. So, in order to calculate the planet’s diameter, scientists need the diameter of the star — something that they can determine using asteroseismology. Similarly, while a technique called radial velocity allows scientists to calculate a planet’s mass relative to its star’s mass, scientists must calculate the star’s mass to "weigh" the planet. Asteroseismology is a way to determine the mass.

"Getting precise estimates of ages is incredibly difficult, but this is something that asteroseismology is really well suited to," Chaplin said. "The ticking heartbeat of the star allows us to get precise measurements."​

The more stars astronomers can examine through seismology, the better they can map where the young and old stars are, and understand which regions of the Milky Way formed first. This is the science of galactic archaeology. By following the trails of vibrations in stars, like an interstellar Indiana Jones would, astronomers can reconstruct how our Milky Way formed.

"Much like digging through the archaeological site of an old city, you can look at what happened in each of those 'rooms' in our galaxy," said Steve Howell, head of the space and astrobiology division at NASA's Ames Research Center in California’s Silicon Valley.

TESS will record the vibrations of up to one million red giants. As it will do a survey of stars across the entire sky, it will in effect be listening in "surround sound." The European Space Agency’s Gaia mission, which recently released positions and distance indicators for more than one billion stars, offers a powerful addition in charting the history of the galaxy. By calculating the ages of stars and determining how long they have been in the red giant phase, and knowing their distances, scientists will get a fuller picture of how the stars of the galaxy came together and how it is evolving.

Scientists will still be using Kepler's data to make discoveries about the Milky Way’s stars for years to come. TESS complements its predecessor’s detailed observations of the celestial orchestra, and continue unlocking mysteries as it listens to more of the grand ensemble of the galaxy.