A space telescope placed far beyond Pluto could one day deliver extreme close-ups of planets around other stars, revealing alien oceans, continents and perhaps even signs of life, new work on advanced mission concepts shows.

The secret to the telescope’s extraordinary power is the biggest lens available in our solar system: the Sun itself. The Sun’s gravity could be used to create a gigantic image from the feeble glimmer of a planet dozens of light-years away.

Capturing direct images of planets orbiting other stars is the next frontier for space telescope designers, with new imaging technology already in the early stages of development and testing. But even the sharpest optics now under development would offer only a single pixel of exoplanet imagery – a tiny dot of light.

Despite immense technological challenges, a few astronomical visionaries are looking much farther ahead: a solar lensing space telescope that could zoom in on small slices of an exoplanet’s surface. They could provide an image many pixels across – a detailed portrait of an alien world.

Such a solar lensing mission could pave the way to the stars. The Voyager 1 spacecraft is already exploring interstellar space; the first such missions in the years ahead likely would make the interstellar medium a scientific destination, to learn more about the Sun’s immediate environment and the conditions on the solar system’s edge.

You could see geological features on that planet. I’m pretty sure you could see lakes and oceans, mountain ranges.

“It’s our next step, to go beyond the solar system,” said Slava Turyshev, a physicist at NASA’s Jet Propulsion Laboratory in Pasadena, California. “And so that’s where we need to go.”

Turyshev recently took a big step of his own. He was the first to publish the intricate quantum mechanical equations that capture the behavior of light at the gravitational lens focal point, beginning some 50 billion miles (80 billion kilometers) away from Earth. Turyshev’s equations show that a close-up image of, say, an Earth twin 100 light-years away could be recovered by a suitable space telescope, at least in principle.

“That was a roadblock,” Turyshev said. “The equations were previously unsolved. [But now] everything has checked out well. We have a good understanding, and confidence in the solution.”

While Turyshev works out the optical details of the solar lens, other specialists concentrate on the engineering.

JPL engineer Nitin Arora is part of a team developing a suite of conceptual plans for robotic interstellar voyages – including what it would take to get a space telescope to the gravitational lensing point at the icy outer reaches of the solar system.

Such early concept development does not necessarily lead to real future missions. And while Turyshev says the mathematics are unambiguous, the technological picture so far is sketchy.

But both men are brimming with optimism about the prospects for such a mission, perhaps within decades.

“You [could] see geological features on that planet,” Arora said. “I’m pretty sure you could see lakes and oceans, mountain ranges.”

Sending a telescope so far into deep space would require precision technology yet to be invented. To find such a tiny pinprick of a target – an Earth-sized planet orbiting a star 100 light years away – the telescope’s pointing accuracy will have to be at least 100 times that of today’s instruments.

And the target planet won’t be sitting still; it will be orbiting its star. To cope with the motion of the exoplanet at such extreme close-up range, smearing the planet into a blur, advanced image processing could be used. But another possibility involves tracking the exoplanet by moving the telescope itself in a kind of corkscrew pattern. This would call for delicate thruster control that would have to be invented, too.

“How to fly there, how long it will take, how to point your communications: it’s all challenging,” Turyshev said.

The broad outlines have been known for a century. Gravitational lensing was predicted by Albert Einstein. He realized that the gravity of a massive body like a star would bend light rays around it. During a total solar eclipse in 1919, Sir Arthur Eddington measured starlight bent by the Sun’s gravity, the first of many landmark confirmations of Einstein’s general theory of relativity.

A space telescope in just the right spot would see the image of an exoplanet amplified by orders of magnitude. The Sun would bend the light from the planet around it, focusing it at a point on the opposite side and, in effect, magnifying the exoplanet into a gigantic image.

But the list of potential telescopic troubles is a long one.

The minimum distance for a solar lensing telescope is 547 AU. And in reality, proper positioning would likely require the telescope to be placed even farther out – perhaps as far as 2,000 AU or more.

The Kuiper belt of icy space bodies, which includes Pluto, extends to about 55 AU. The Oort cloud, the realm of dormant comets that are the most distant objects gravitationally bound to the Sun, forms a shell extending from 5,000 to 100,000 AU.

The nearest star, Proxima Centauri, would require a journey of 271,000 AU.

Are we there yet?

“Think about New Horizons,” he said of the space probe that made a spectacular flyby of Pluto in July 2015 after a nine-year journey. “It was the fastest probe ever sent into space [at launch]. It did not get to Pluto very quickly; it’s a very long way. The gravitational lens of the Sun [position] is more than 10 times as far away as Pluto.”

The trip time could be cut substantially with exotic new propulsion systems, like ion thrusters, solar sails, or even laser-pushed sails.

Reaching the solar gravitational lens within 25 years – instead of the 50-year time frame suggested by present-day technology – might even require a new form of nuclear propulsion, Arora said.

“We might want to use a mix of two propulsion technologies,” he said, starting with a nuclear fission reactor or perhaps solar-thermal propulsion. This could be combined with an “Oberth” assist from the Sun – flying close to our star, dipping deeply into its gravitational field, then making a perihelion maneuver to greatly increase the spacecraft’s speed and fling it toward the outskirts of the solar system.

Getting from smear to clear

Solve the problem of propulsion, and the next item on the list involves imaging. Interfering light from the exoplanet’s parent star, and from other sources, would have to be neutralized. And placement of the telescope would have to be well beyond the focal point for the light rays being bent around the Sun; otherwise, our own Sun’s glare would swamp the tiny, distant flicker from the exoplanet. 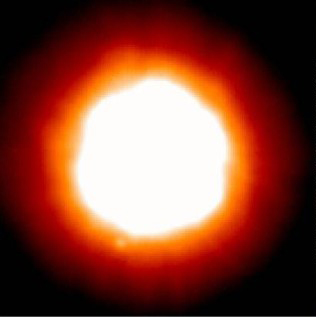 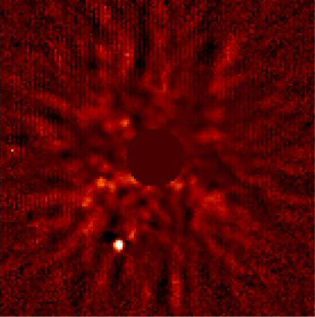 The bright starlight of sun-like star 15 Sagittae hides the brown dwarf orbiting it. Interfering light from our Sun could similarly hide planets from our view. Credit: Gemini Observatory

Once in place, the solar lensing telescope would not be confronted by an image of an entire exoplanet. Instead, the planet’s light would be smeared into a ring around the Sun, an effect produced as the Sun’s gravity bends light from an object – in this case, the distant exoplanet – that is behind the Sun but is also in alignment with the Sun and the telescope. This smearing effect is known as an Einstein ring.

Within the Einstein ring, strips of the planet’s light could, at least in principle, be captured by the telescope. So in addition to the blur caused by the exoplanet’s movement, which would somehow have to be corrected, these strips would have to be reassembled to create a coherent image of the exoplanet’s surface.

And after the great investment in designing, building and launching such a telescope, and perhaps decades of transit time to the right spot in the dark, frozen reaches of the solar system, it turns out that the telescope’s range would be extremely limited. It could only observe a single target.

The problem is that to turn to a different exoplanet, even one separated from the first target by a single degree, the telescope would have to move some 10 AU—a bit farther than Saturn is from the Sun.

To justify such a complex but limited telescope, a worthwhile target would have to be identified in advance: an Earth-like exoplanet where signs of life already have been detected by other instruments. So far, we don't know of any such planet.

But if we did, seeing such a world up close would be a game-changer for our understanding of our place in the universe.

“It is very fulfilling and exciting to be involved in something that can shape humanity’s future, and change life as we know it,” Arora said.